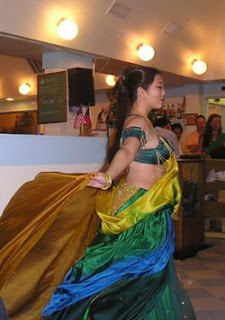 Jeju is a volcanic island located south of Korean peninsula. It only takes about 45-50 min plane ride from Seoul to get there...yet it is an entirely different world.Somehow everything feels beautiful...and well, maybe it is. As I walked out of the plane, immediately I felt the atmosphere...the sunlight, not too strong nor too weak. We had decided to take a taxi tour that day, which means one taxi driver will be with us throughout the day to lead us to different monuments of Jeju.
There's a legend about the Solitary stone. It is said that the solitary stone is the remnant of a wife of a husband who had gone to the sea and never come back. She had waited him so long that she had become a stone. To her left, you can see another set of rock, which is supposedly her husband. He had died in the sea, but had come back next to her afterward.
It is strange how the whole entire continent of Korea is filled with such sad stories. I suppose we are incredibly sentimental people. I am not sure why else such sad love legends linger at so many different sites in Korea. As a nation in whole, Koreans had always suffered, perhaps due to lack of will to protect themselves...or perhaps because so many of Koreans are at their soul, artists. They talk of love, wistful breeze, the absolute right at wrong...they compose poetry, enjoy good food, gifted in art, and talk of the sadness.Perhaps to some, Koreans are quite a sad bunch of people.

Now I look at this world with the eyes of a grown up person. I can still remember what I had felt when I was young. Everything was full of wonder then. I suppose it still is now since I don't know why I still seem to maintain such naivete amongst such sarcasm and cynicism. I suppose that is my dichotomous nature.More on Oedolgae Rock

Korean folk village is located near the city called "Suwon" in Yongin. It is supposed to be one of the beautiful cities in Korea. Nowadays it is well developed, but it still retains the mountains full of trees and the smell of the old. I had not been to the folk village in ages...literally not since I was six or seven. I remembered almost nothing of this place other than few activities we did...the food and certain sounds.
These wooden posts are male and female...they protect. Koreans believed in local gods...and was a very superstitious lot.
The grain mill is where people used to grind the rice, barley or other grains to make bread-like things...especially the rice cakes.
There were very little number of people when we were at the folk village. Since we hardly saw people, it was almost like I was re-living the past...walking amongst the houses on the small streets. There were cicadas everywhere, cook breeze, the shadow from the trees...
This is a traditional Korean folk dancing. Lots of playing of the gongs and drums while the men twirled the ribbon atop their head.
From the silk worms and other materials, women of old had to thread their own cloth. This is an actual demonstration of one such weaving machine.
I've always been fascinated by the oriental medicine so I dragged my companion to the old pharmacy. In the backyard, I found these rows of goodies...an actual ginseng farm. Who would have thought!
The typical pharmacy of old would have these bags of labeled medicine hanging from the ceiling. Even from far away, one can smell that special fragrance emanating from the boiling herbs. I can still recall this small of my childhood with fondness.
Perhaps many might not believe, herbal medicine is based on several thousand years of practice and recording. It is hard to understand why people mistrust it so. It is overall better for one's body. Who's to mistrust several thousand years of practice while modern medicine has been only around for few hundred years?
I think this was a cherry tree, but it could be something else. I might have taken few and eaten them if it had not been so unripened.
Only very few, perhaps only two people are able to perform this trick. This man is one of the living treasures of Korea. He performs on the rope all different types of tricks. It starts with simple walking from one end to the other.
Then he cracks jokes on the other hand then the tricks become progressively harder. He jumps and sits on the rope, even kicks and turns. Needless to say my heart was somersaulting with his body.
One can watch the traditional nobleman's wedding ceremony here. Here are three traditional shoes to be worn by the bride and her two helpers.
Traditionally, (not in this ceremony since it is too hot and uncomfortable to do so) the bride wears about seven layers of skirts, not to mention all else she has on her. She is also not supposed to look up from her hidden position. It is absolutely necessary for her to have helpers since she is required to go down and bow as well as participate in the ceremony without looking up.
Normally, a table laden with food and other assortments are laid in between bride and groom. They bow and partake in drinks. The ceremony leader reads certain passages...all the while, these two people might not even have ever set eyes on each other. Sometimes we are told that during the ceremony, they surreptitiously check out one another.
Another one of the living treasures. This is one who makes paper using certain type of plant. It is told such hand made paper can last thousands of years. It is sad that there is no other to learn his trade. So many living treasures are now quite old and with no one else to carry on their skills. Are such traditions to be disappeared forever from Korea?
At the end of wedding ceremony, groom rides donkey or horse and the bride rides her little carriage to bride's house. The couple are to stay there for a month or so then the real marriage at groom's house begins afterward.
This contraption uses water power to grind the grain. It was a fascinating device. When the water fills the wooden scoop, it is lowered then the end of the scoop hits the stone slab with grain with large thump. Water is emptied then cycle begins again.

I got up frightfully early in the morning without a complaint. I was going to see Abu Simbel. How could I feel bad? It didn't matter that I was still sick, tired from heat and lack of sleep. How many times in life does one get to see such monumental structure?
The flight to Abu Simbel was a very short one. We landed, directly boarded bus, and was there. We approached the site from the back so it was impossible to see anything, but a glimpse of the Nasser lake...then I saw. The colossal statues. I had read and seen many pictures about Abu Simbel, but I was not prepared for the sight in front of me.

What was I expecting? I am not sure, but not this. This incredible structure that is supposedly cut into the mountain in olden days. Of course, this temple too had to be relocated due to the flooding by the construction of the dam. That is something I did not know. I can only imagine how hard it must have been to move this incredible place.
If "awe-inspiring" is what it was trying to achieve, Abu Simbel did just that. I can clearly see Ramses II's personality. He wanted to inspire and he certainly achieved it. As we walked into the temple through the seemingly narrow entrance (compared to the whole structure I mean), we come face to face with the colossal columns. The colors of ceiling reliefs are still visible and each columns, 8 total leading to the inner chamber is decorated with hieroglyphs.
There are images of Ramses II everywhere. The columns themselves depicted him...His power. I am told that the commoners could enter this part of the temple. It would have been like the people of Medieval era entering the Cathedral. How they must have truly believed the god-Pharaoh Ramses II.

Past the columns, one can see the numerous wall reliefs of Ramses II's deeds...his battles, his victories, his power. Each relief tells a story. I cannot be sure how many of such stories are actually true, but even if they told half the story, how grand his life must have been?

One famous battle Ramses II had was that at Kaddish with Hitites. It is told that he had won the battle with the help of God Ra. The battle had been almost lost. He had been outnumbered...but he rode through, to the enemies, his shields shining, his stance never faltering...

Another story of Ramses II's battle with Nubians. He is the mighty king. Even I started to believe as I moved from one scene to another of his valor. It didn't help that he was looking down from each columns and each wall.
It is told that only two days out of the whole year, the sun goes through the temple. It shines into this inner chamber where four figures reside. One, of course is Ramses...a deified version of himself. The most extraordinary fact about this inner chamber is that the sun's ray only touches three of the figures. The dark god Ptah is never touched. The temple had been set on exact location and height to be able to achieve this. Even modern science seem to have failed on this. When the temple was moved, because of the height difference and slight change of location, the day that sun shines through the temple is off by few days.


Ramses II had many wives and many sons and daughters, but his first wife, Nefertari had been the one he never forgot. It is perhaps she who had made him have so many wives. He could not forget her. She had been older than him, but that had not mattered. She is only one who in the history who had been deified by her husband.

I cannot imagine such love. There are remaining records of love letters between Ramses and Nefertari. Love letters! Can you imagine? This is from the Pharaoh...the almighty king of Egypt.

Nefertari's temple was on a much smaller scale, but still exquisitely beautiful. If the theme of the Temple of Ramses had been that of valor and power, her temple was that of beauty, refinement, peace, love...

Inside the temple. the columns are decorated with the goddess Hathor, of song, love...The temple reliefs do not speak of wars...but instead of peace, music, love and forgiveness.


After the tour of both temples, we sat in the shade in front of the large man-made lake Nasser. The dam had created this and I wondered what still lay below the depths of those tranquil waters.